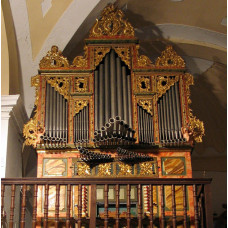 This was probably the first instrument built by local organ-builder Tadeo Ortega, and dates from 1776, when he was twenty-seven.

A typical eighteenth-century rural Castilian instrument, it is full of character and produces an immense volume of sound on very low wind pressure.  The flue chorus is particularly fine, and the reeds somewhat rustic and very different from those at Frechilla.

Little is known about the history of the instrument, but it was cleaned and repaired at various times between the mid-nineteenth century and the early twentieth.  By the middle of the twentieth century, it had become a ruin, with some pipes missing and many severely damaged.  In the late1980’s some registers were made playable, and then in 1997 the organ was totally dismantled and taken to the workshop of Alain Faye in the south of France.  He carried out a full restoration, using as much of the original material as possible.  The organ retains its original soundboards and much of the mechanism.  The majority of the pipes were recoverable, but most of the mixtures are new, as is the 8’ internal Trompeta Real. Enough original material did remain, fortunately, for these new pipes to be an accurate re-creation of the originals. The wind is now supplied by an electric blower feeding a parallel reservoir which, to judge from the newspapers glued to it, dates from 1911.  This was probably the time at which the instrument had last received attention before recently being brought back to life

The Castilian Organ-Builder Tadeo Ortega Tadeo Ortega was born in Burgos in 1749 but moved to the neighbouring province of Palencia before he started working as an organ-builder in 1772.  The Capillas organ is almost certainly the first instrument for which he took total responsibility.  For much of his life, he lived in the neighbouring villageof Fuentes de Nava, where two of his late two-manual instruments survive in original condition.  A full restoration of one of them (in the Church of San Pedro) was begun in October 2005 and is being carried out by the French organ-builder Bernard Cogez. The other (in the Church of Santa María) is still playable, and is to be fully restored once the restoration of the church is completed.

In all, Tadeo Ortega built or rebuilt some 25 instruments during his working life, all the in the Castilian region of Tierra de Campos, the last being in Castromocho in 1821.  He died in Palencia in 1823.  He was the last of the great organ-builders of Castile, although little celebrated during his life.  His instruments, however, are of exceptional quality.  They are both mechanically robust (several are still working reliably in virtually original, unrebuilt condition) and tonally impressive.

The church room has medium-wet acoustics with about 3.5 seconds of reverberation.