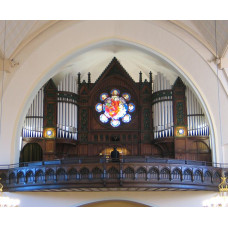 The organ of Dortmund-Dorstfeld in Northern Germany is located in a neo-Gothic brick church, built in 1904 for the strongly increasing population of the German "Ruhr-Gebiet", which was the largest area of coal mining in Germany.

The 3-manual, 40-stop Wilhelm Sauer organ op. 915, was inaugurated on December, 16, 1904. This representative instrument was completely donated (!) by a private person, Mr. Schulte-Witten, a wealthy citizen, honorary officer and Presbyterian of the Dorstfeld parish. The cost was 15,000 Reichsmark.

The late romantic Sauer organ is one of the very few instruments in Germany (the author only knows two), which have survived almost completely in their original state! This organ even survived four disasters, World War I and II, the German organ reform movement ("Orgelbewegung") and a church fire twelve years ago, caused by a lightning strike, causing the burning tower to crash down into the church.

The front pipes (Principal 16) are actually made of zinc. It isn't possible to find out if they are the replacement of original tin pipes (tin front pipes usually had to be replaced during World War I, to support weapon production!) or if they were already used in the original organ. A lot of romantic organs used zinc front pipes before World War I, because the tin prices were very high at the time. There is no loss in tonal quality of this rank compared to the Principal 8 (tin), so that we could assume, that they are original.

Sauer (1831-1916) and Walcker were the most important and biggest organ manufacturers of that time and built more than a thousand instruments. Sauer himself was a volunteer at the Cavaillé-Coll (1811-1899) workshop for one year (about 1852), where the young Sauer met the organ building genius, whose fame grew more and more. Sauer very often is named as the "German Cavaillé-Coll". He transformed French organ concepts to the German sound concepts.

Because of this Sauer himself initially had big problems in Germany because there was an unwritten law not to build any French oriented organs, (German "Französelei"), because France was one of the basic enemies of Germany!

It is assumed that Sauer learned how to build high-quality overblowing pipes there, which we find in his instruments. Sauer's sound concept was based on the sound of the late-romantic symphonic orchestra and he tried to transform this sound into the organs.

The German romantic organ is like a paint-box, where you can add a lot of colours, thus getting new ones by additive mixing. Therefore you usually find a lot of 8ft stops. The registration is completely different from baroque organs. You always look for orchestral like tonal colours. The mixtures only crown the sound, but aren't leading voices. German reading customers may find an excellent article on sound concepts of German romantic organs with a lot of pipe sound examples by Gerhard Walcker-Mayer (see Sauer-Links)

The biggest Sauer organ is located in the Berliner Dom and was built only one year later than the Dorstfeld organ. The time period between 1900 and 1910 is said to be the peak of the German late-romantic organ art.

Later on , the organs became more and more industrial mass products, built in very short time with a more and more uniform concept. This was the main reason of the beginning of the (German) organ reform movement, which demanded a come-back of high-quality manufactured organs and considered the sound of Baroque organs as the only valid sound concept.

This movement , not understanding (any more) the sound concept and music of romantic organs, usually resulted in a modification or even total dismantling of the (late-) romantic organs, especially in Germany.

Modifying these organs in a "neo-baroque" style usually was not very successful, because it destroyed the inherent perfect sound structure of those organs. Therefore most instruments were completely removed a short time after.

From today's point of view, we regret this consequence of the organ reform movement and usually don't find many of those organs in Germany. Due to the appreciation and the efforts of the former organists, the organ remained unmodified. Only some cleanings and general overhauling took place. Therefore the Sauer organ of Dortmund-Dorstfeld is a first-rate object in the history of music and very often serves as a reference instrument for Sauer organ restorations/reconstructions.

When playing or listening to this organ, you will have the original sound of 1904 with a strong relation especially to the music of Max Reger. Reger himself and Sauer had good relations. Straube performed most Reger works on the big Sauer organ of Leipzig.

The Dorstfeld organ has a wide range from very soft tonal colours (pppp) up to a very strong Tutti with some "brute force", which is necessary for Reger's work (ffff).

"Apart from the super-octaves of the manual reeds (2nd chorus is missing), the original pipes in their original voicing still exists. The durability of the pneumatic system is rather amazing.

The windchests of the manuals are all positioned at the same level, the two great organ chests one behind the other on the middle and the right, the IInd manual on front of the left with the IIIrd manual behind it. The pedal is located in the left corner of the ground. The windchests that have been in perfect operation for now more than 100 years, consist of first-rate pinewood of the Brandenburg woods used by Sauer.

The metal pipes are designed as follows:

Tin for all diapason pipes, lead for all feet and bodies of the flutes and stopped pipes, natural casting for the dolce and the reed resonators, zinc for the sub-octave of the Aeoline . The reed stops are provided with parallel open shallots, trumpet and trombone are located on wood blocks. The wooden flutes are blown strongly from the outside (see pictures!), a design which is rather extravagant.

Sauer used four scales and wind pressures. The modulating capability of the foundation stops (without diapason and gamba) and the charm of the overblowing flutes, the expressiveness of the Cor Anglais and the glitter of the Voix Céleste are inimitable tonal highlights in the German organ building of the late Romantic period" (Source: "J.S. Bach in Neufassung", CD booklet Motette 11901)

The organ was recorded and processed with 48 kHz, 24 bit, 6-channels, in February 2008, using the multi-layer release technique introduced by OrganART. All stops were recorded with multiple release levels.