Other operating system and PC optimizations and diagnostics

We recommend having as few other programs and background processes running at the same time as Hauptwerk as possible, since all

audio by accessing the Internet or hard-disks. There are many websites that cover optimizing particular operating systems for audio.

Some things to try (in addition to those mentioned previously) if you have problems with audio glitches on Windows PCs:

1. Make sure you're using the latest version of Hauptwerk.

2. If you had previously disabled the Windows page file (which was recommended for Hauptwerk 2 and earlier versions) or had

adjusted Windows virtual memory settings in any other way, please make sure the page file is re-enabled and set specifically

back to its default of 'system managed size'. Having it disabled or set to an inappropriate size can cause stability problems,

performance problems, or other severe problems with Hauptwerk, other applications, or Windows itself, especially if 4 GB or

more of memory is installed. On Windows XP use Start | Settings | Control Panel | System, then click on the Performance |

the hard-disk you want Windows to use for its virtual memory, then click Set. Finally click OK on all of the windows and re-

boot the computer if you changed any settings.

3. See whether the problem occurs with just a very small sample set loaded, and when just a single pipe is sounding. For

example, try the free Ott Orgel sample set, which can be downloaded from our website. If so, then the problem is probably not

due to insufficient memory or an incorrect polyphony limit setting.

4. Make sure that all current Windows and driver updates are installed.

5. Make sure that you have the latest BIOS version installed for your motherboard.

6. Make sure you have the latest manufacturer-supplied ASIO driver installed and selected in Hauptwerk for your audio interface

audio interface drivers ignore the buffer size that an application (such as Hauptwerk) requests, and instead always use the

Hauptwerk. You can determine which buffer size setting the driver is using by looking for the buffer size shown in the

Hauptwerk log file (use Help | View recent error/activity log in Hauptwerk, scroll to the end, then look at the latest INF:5152

8. Try running another 'pro audio' application that uses ASIO, apart from Hauptwerk, to determine whether the problem is

specific to Hauptwerk. For example Native Instruments make a Hammond organ emulation called the B4, which uses ASIO in

stand-alone mode (a demo version can be downloaded from their website). Make sure that you select the same ASIO driver

that you are using for Hauptwerk, and try the same audio/ASIO buffer size.

9. Disconnect any hardware devices that are not absolutely essential for Hauptwerk and the computer to function, to see if that

10.Try disabling your motherboard's onboard audio, either in the BIOS or in Windows Device Manager (in the Windows Control

11.Make sure that all Windows sounds are disabled (Control Panel | Sounds ... | Sounds and set the sound scheme to 'No sounds').

12.Make sure that no other applications are running at the same time as Hauptwerk, especially applications that might try to

produce any audio/sounds. In particular, check that nothing unnecessary is running in the Windows System Tray, such as

13.If possible, set Windows to use a device other than your main audio interface as its default device for playback and recording

(Control Panel | Sounds ... | Audio) to try to prevent Windows or another application from trying to access the audio interface

whilst Hauptwerk is streaming audio to it.

14.Check that no hardware resources are shown as conflicting in Windows Device Manager (in the Windows Control Panel).

15.Also check that no hardware resources, such as interrupts (IRQs), are being shared between your audio interface (or the

firewire/IEEE 1394 controller, if the audio interface is a firewire unit) and any other key system hardware, such as the graphics

card. You can check hardware resource assignments by selecting View | Resources by type in Windows Device Manager (in

the Windows Control Panel). If your audio interface or firewire controller are sharing any hardware resources then try moving

the audio interface or graphics card (or whichever other device is sharing the resource) to a different PCI/PCIe slot, or see if

your motherboard's BIOS allows the resources to be reassigned manually.

possible firewire port, depending upon its connection type).

Manager (in the Windows Control Panel). Network/wireless devices/drivers are a common cause of audio performance

18.Keep any network leads and Internet connections disconnected whilst using the computer for audio. This prevents other

running, and potentially causing the network drivers to take processing time away from audio or from the audio interface's

Indexing Service ..., then select the option to apply to all sub-folders/files when prompted).

20.Disable Windows Vista's scheduled hard-drive defragmentation (you will then instead need to defragment you hard-disk(s)

manually periodically). To do so, right-click on each drive icon, select Properties, select the Tools tab, click Defragment Now,

un-tick Run on a schedule ... and reboot.

21.Try running the free DPCLCAT utility available from Thesyscon to see if a hardware device/driver on your PC is introducing

an excessive latency that is prevent your audio interface from being able to stream low-latency audio reliably. On a well-

performing PC the latency values would normally be in the 50 - 200 microsecond range. Any values in excess of 1000

(low latency) audio applications such as Hauptwerk. If DPCLCAT shows a problem then you will need to identify the device

that's causing the problem and probably either disable it (either in Windows Device Manager or in your motherboard's BIOS),

or find a better-performing driver for it, or adjust its driver/BIOS settings.

22.If your audio interface driver comes with audio/ASIO performance diagnostic utilities, then try using those in conjunction with

their documentation to see if they can show where the problem is occurring. For example, the Echo Audiofire interfaces

computer that's prevent the audio drivers from being able to work robustly for low-latency audio.

23.If you're still having problems after trying all of the above suggestions, try sending a diagnostic file to your support provider

(File | Create a diagnostic file ... in Hauptwerk) and detail the results of the preceding suggestions.

On both Mac OS X and Windows, we also recommend disabling any power saving modes, such as hibernation / sleeping, screen

savers or hard-disk sleeping. On notebook computers this needs to be done only for the times when the mains power supply is

connected (when conserving power would be less important anyway), and you should always have the mains power supply connected

when using Hauptwerk. If the computer hibernates / sleeps, or enters a power-saving mode whilst Hauptwerk is running, then you

might experience extreme performance issues, especially if the operating system needs to re-read all memory back from disk when

No other operating system optimizations are usually needed on Apple Macs running OS X, since OS X has high-performance audio

and MIDI support built-in and is usually already well-optimized for audio and MIDI. 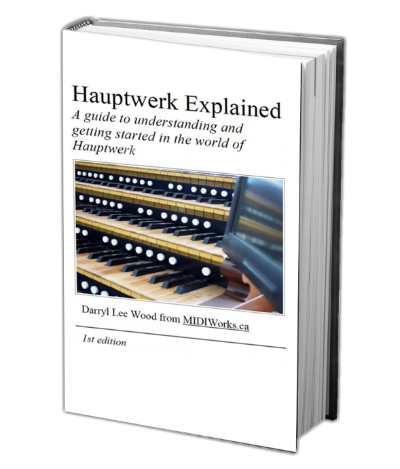